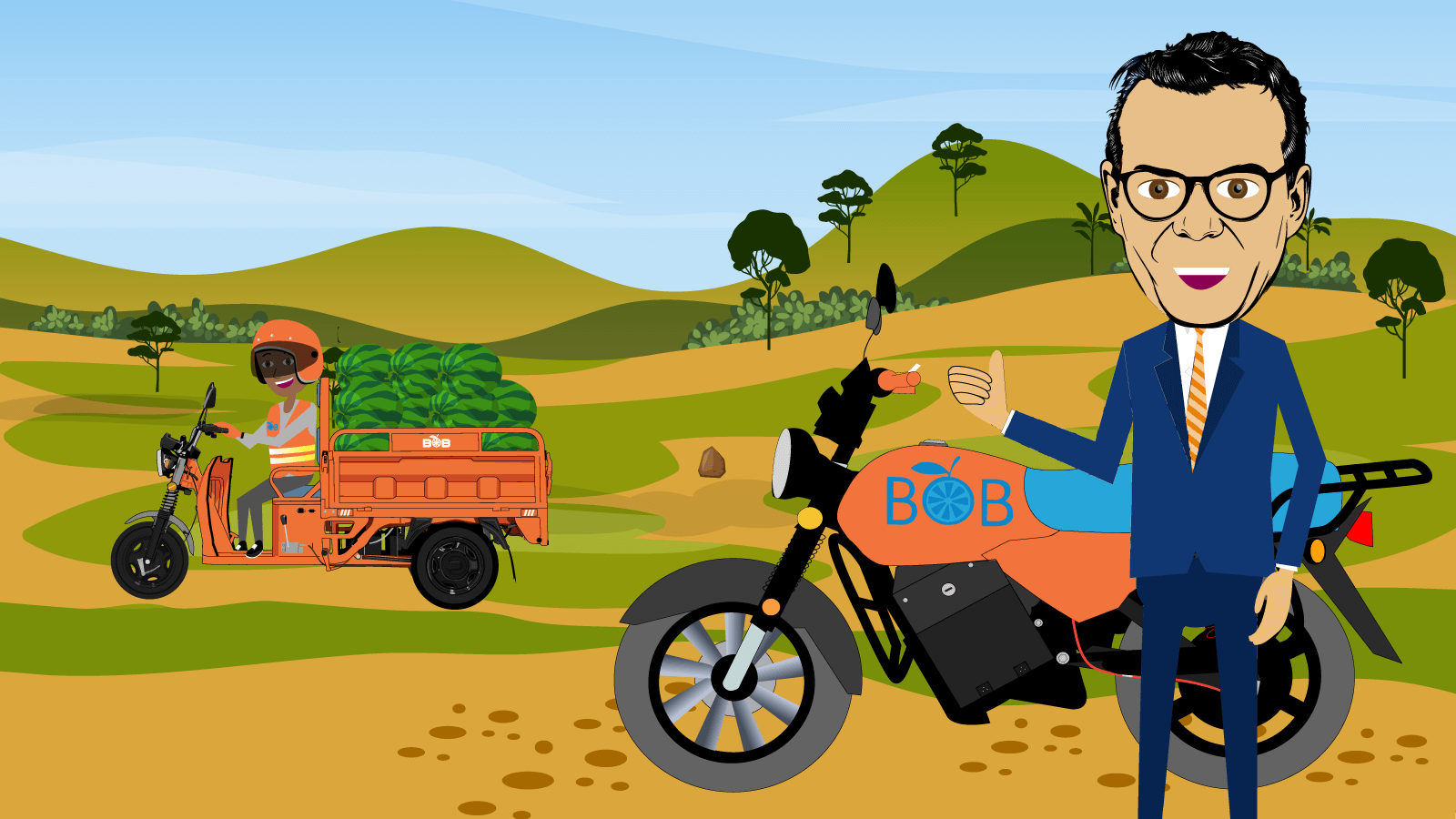 After a steep contraction resulting from the COVID-19 pandemic, sub-Saharan economies are expanding, leading to a boom in the logistics sector as the need for transportation rises. However, more than half of active vehicles in the region are inefficient 2-stroke petrol-powered motorcycles, primarily used in taxi and delivery services that drive hundreds of kilometers per day. The fuel they burn is costly for drivers and produces large quantities of toxic CO2 and fine particulate emissions.

Recognizing the need for cheaper and more efficient transportation solutions, Bob Eco Ltd., a rapidly-growing electric vehicle and clean energy company, entered the African markets with a line of orange-clad electric two and three-wheelers designed for the needs of taxi and delivery drivers. Since the first one hit the road in October of 2020, Bob Eco’s bikes create a total of 2.6 jobs per bike and save 5 tons of CO2 emissions from being released into the atmosphere every year.

Able to save on fuel costs, drivers who switch to one of Bob Eco’s vehicles nearly quadruple their take-home pay on average – enabling them to support their families and equip their homes with basic necessities like running water. Further, Bob Eco provides its bikes on a lease-to-own basis, giving drivers the chance to accumulate wealth once they pay off their rides.

Being the clear choice for both drivers and the environment, Bob Eco has attracted the attention of African governments, leading to several state-level partnerships, including an order for 232,000 vehicles from the Senegalese government.

Bob Eco signed a 200-million-dollar production deal with manufacturing juggernaut Jincheng Suzuki for annual volumes reaching 200,000 units to keep up with demand. Bob Eco has also recently opened a manufacturing facility focused on producing tricycles and Tuk Tuks, popularly used for comfortably transporting voluminous goods and larger groups of people. This facility has an annual production capacity of 1,500,000. The electric vehicles produced by this facility alone can save over 1,500,000 tons of CO2 emissions by 2024.

Using the UN Environment eMob calculator, scenario calculations show that 11 billion tons of emissions could be saved by 2050 with a global shift to 90% battery-electric motorcycles. Given the rapid growth of two and three-wheelers in Africa, Bob Eco is focused on areas where it can make the most significant impact.

However, Bob Eco is not fighting only for the environment. Bob Eco also runs several social programs in Africa serving people in need. These programs include feeding hungry children nutritious meals via planting fruit trees and rearing animals, building new water sources for local communities, providing schools with scholarships and resources, and providing shelter solutions for those without any.

To do good in more places, Bob Eco launched its Bobcoin (BOBC) STO in March of 2021. As Bob Eco sold 24% of all Bobcoins for tens of millions of dollars to investors in over 40 countries, the STO can be considered a massive success. Bob Eco’s drift to expand has led Bob Ultee (CEO of Bob Eco) to announce that Bob Eco is “going public” in March with an ICO-WA. Bob Eco will sell BOBC on the primary market in this second round of funding, which is already accessible to retail investors via presale on the reputable www.Knaken.eu crypto platform. The expected listing valuation is $1.45 billion to $1.5 billion.